Every year, the months of March through June fly by in a blur for our family. They are filled with end of the school year activities, field trips, and countless baseball games and practices for my sons. And, don’t forget that this is all during SPRING IN REAL ESTATE!

Honestly, I have a hard time thinking about what is going on the next day, because I have so much to manage in the moment. We have a chalkboard calendar that hangs in our laundry room that is color-coded by person. Why the laundry room? Because, on the rare occasion I’m at home, that’s where I’m at.

This June, we had a particularly grueling baseball schedule – 20 consecutive days of games. Some days there was only one game, some days there were multiple. A baseball season like this prompts me to ask myself, “did I sign up for this?!” Well, yes, I did. And it turns out I’ve learned a few things along the way.

#1: Good Things Come to Those Who Do the Right Thing
My oldest son Quinton’s baseball team played the first game of a weekend tournament consisting of mostly AAA baseball teams. Up until this point, they played mostly AA teams, so the competition was going to be tougher. At the top of the 4th inning, my husband, Kevin, noticed that the opposing team sent their starting pitcher back out to the mound to warm up. He was a good pitcher and it was a close, low score at this point in the game.

Kevin approached the other team’s coach to make sure he knew that, according to the rules, if the player pitched the 4th inning, he could not pitch again the entire weekend. The coach was unaware and, so, made a pitching change. Kevin could have easily not mentioned it and avoided seeing that pitcher again in the tournament. But, he did the right thing and we won 4-2 – go Badgers! A reminder that good things always come back around.

#2: White Baseball Pants Are My Nemesis
Last year, the boys wore grey baseball pants with blue piping. This year our baseball league changed to white pants with blue piping. These white pants look so sharp… until they wear them. Maintaining these pants has become quite a time-consuming part of my week. Rumor has it, you can take them to a traditional car wash and spray them down, but I really don’t have time for that. 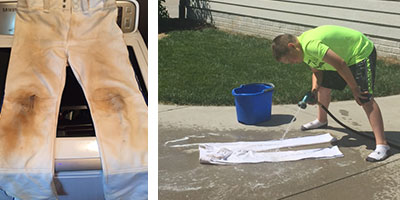 Colton getting his “jet spraying” on.

So, after every game, our white pants get thrown in a plastic bucket, covered in two scoops of BIZ, and the bucket gets filled with water. Fast forward 24 hours, we hose the pants off in the driveway with the “jet” setting on the garden hose. Do my neighbors question this? Not yet. The best part is, the boys can hose their own pants off. Tell me you do whites in your driveway, too?

#3: The Unexpected Things You Learn 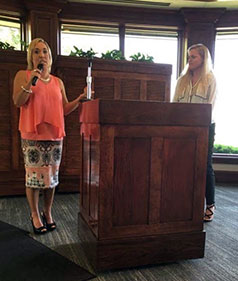 I am the Immediate Past President for the Omaha Women’s Council of REALTORS®. We have luncheons throughout the year that feature different speakers. A recent speaker was the founder of Rejuvenating Women, Julie Shrader. This Omaha-based non-profit does some amazing work helping victims of human trafficking. This is a terrifying problem and it DOES happen here. I learned so much about how people end up in these situations. It’s not usually the “Taken” Hollywood version. It often happens to people who are going through a rough time or fall in with the wrong crowd. I was reminded that day that I am so blessed, not only with safety, family and friends, but also with the ability to give back to my community. I am fortunate to be a part of the Women’s Council of REALTORS® and the Omaha Area Board of REALTORS®. These organizations are dedicated to education and giving back to our community. Being heavily involved in both, I have learned, grown and become a far better REALTOR®. Rejuvenating Women is the charity that the WCR selected as their Golf Tournament partner this year, which means they will receive a sizeable donation to help them continue their great work!

#4: Mom Guilt Will Cost You
REALTORS® have interesting schedules and many responsibilities. All of them require use of a mobile office called “The Car.” A few weeks ago, my youngest son, Colton, was lucky enough to accompany me to the office. Unfortunately, he never considers this a good experience. Today, we were only out to work on some lock-box and sign management, but, by his attitude you would think I had him scrubbing toilets. As usual, he wears me down and convinces me that he has earned some sort of special treat. This time, it was a trip to the video store to rent movies. Although I’m pretty sure the only reason we went was for the giant gummy snake he talked me into buying.
Mom Guilt: 1  Crystal: 0

Both boys had games at the same time one night. If you are a parent, you know how hard it is when you have to miss watching your child do something they love. Even when you have to miss it because you are with another child, you can’t help but feel torn. But I lucked out that day – they played at the same ballpark. So, I was able to stand between the fields to watch them both play. I’ll take a break-even day anytime!
Mom Guilt: 1  Crystal: 1

#5: Sometimes When You Lose, You Win
Quinton’s team played amazing in their first AAA tournament. They worked hard the entire weekend and kept their heads up, which got them to the Championship Game. Unfortunately, they had to play back-to-back games to get there and, of course, the heat was sweltering. They lost the Championship 7-0. Of course they were disappointed, but their great performance got them reclassified as a AAA team the following week! They had a tough loss, but learned, and ultimately, moved ahead.

Left: Quinton’s team – Go Badgers! Right: My husband Kevin (aka coach) and Quinton cheesing it up!

I can think of many times in my career that I’ve experienced similar losses. Some buyers have lost out on their dream homes because of multiple offers, which is never easy for a REALTOR® to see. Sometimes, I’ve had sellers in very tough situations and things just never seem to go right for them. What I’ve learned from those experiences as a REALTOR®, and in life, is that during any challenge, if you keep your head in the game and learn from the situation, you usually find a way to win the next time. 🙂

Crystal Archer
Realtor Crystal Archer walks the tightropes of motherhood, marriage and real estate. Follow her as she strives for balance in her series Did I Sign Up for This?.