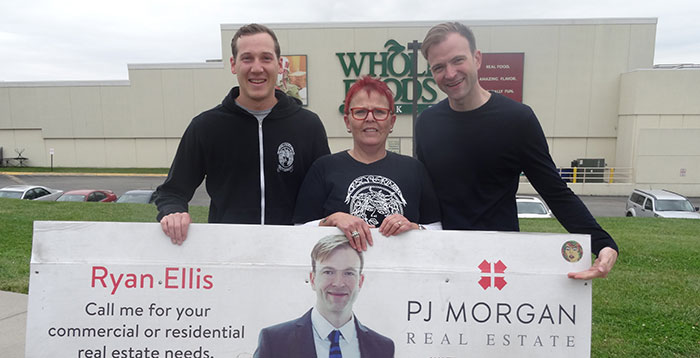 This week in our Life + Style blog, P.J. Morgan Real Estate President, Ryan Ellis, shares his love of the Omaha community and the surprising (and spicy) connections that are found within it.

I’m one of those people that doesn’t like to hear my voice recorded and I’m judgmental of pictures taken of me. So needless to say, I wasn’t excited about advertising my face on a bus bench. A bench that I was sure would be graffitied and mocked by my friends. Well, yes, it has been mocked by my friends…and now it’s been graffitied, too!

So, “graffitied” might be a little extreme. It’s actually just a sticker. After being “lovingly” informed by my friends that my fear had turned into a reality, I drove by “my” bench about a dozen times trying to catch a glimpse of the sticker. I could have gotten out of the car and looked at it up close, but that would have been too easy. I also could have stopped yelling at people sitting on the bench, “Hey, that’s ‘my’ bench!” I finally slowed my car down enough one day to get a good, close up look at the elusive sticker. And then I was even more perplexed. 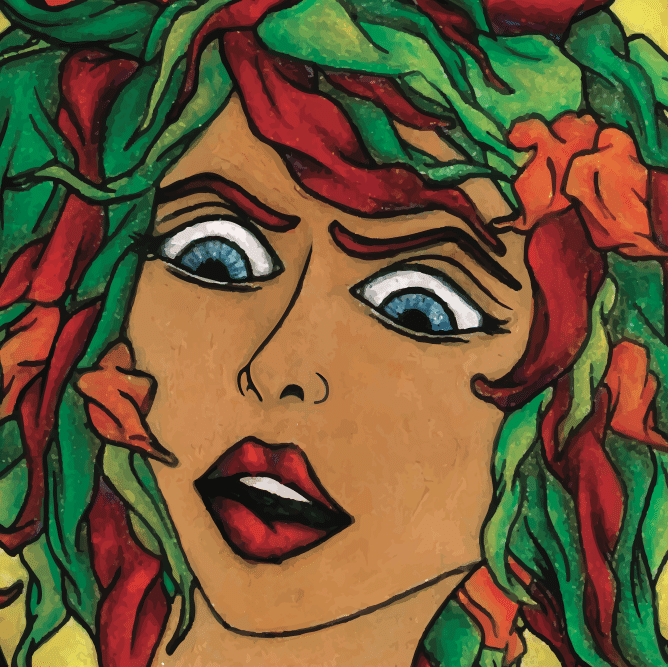 What is that sticker? It’s crazy and it’s a lady! She looks like she has some wild hair and has seen something she can’t unsee. She has no name, no description and no website… What the heck!?

Fast forward to a Monday night. It was a rough day. I was having a cocktail, slouching sitting on the couch and scrolling through Instagram. Mid-scroll I saw it. THERE SHE IS!! THAT’S THE CRAZY LADY!! I couldn’t believe the chances that I’d see her again, so I set out to track her down. And that is the beginning of my friendship with Crazy Gringa Hot Sauce and its creators, Mary Current, and her son, Anderson Current.

Fast forward again, to a Friday afternoon, when I went to meet Anderson at Whole Foods, near the bus bench that I shall no longer refer to as “graffitied,” but instead as a “bulletin board supporting locally owned business.” Anderson is an approachable guy – a wide smile was across his face as I walked to his table. He was dawning a baseball hat and, appropriately, wearing Crazy Gringa logoed clothing. I suspected he thought it would be weird I approached him about the sticker (ok, it was a bit weird), but Anderson said it actually happens a lot! He often hears from friends and customers who see the sticker in all sorts of interesting locations across the city.

I wanted to know why Anderson started Crazy Gringa Hot Sauce and how it ended up on the shelves at Whole Foods and HyVee, and on menus at restaurants across town. But before I could even let him get that far in the story, I interrupted to tell him I liked the Jalapeno Hot Sauce the best, just to be clear.

Then Anderson told me how the brand and sauces were born from long distance care packages of hot sauce his mom would send from Omaha to Colorado, where he was living at the time. She had too many peppers in the garden one year, so she started making a ton of hot sauce. The mother-son duo ended up having a back and forth critique about the sauces and how to make the creations even better. Soon they had perfected their sauce, with an idea to sell it locally. At the time, Anderson and his wife had already planned a move even further west of Omaha, but the opportunity to create a locally made, artisan hot sauce was too great. Anderson and his wife abandoned their planned move and came back “home” to Omaha to embark in the Crazy Gringa Hot Sauce business. 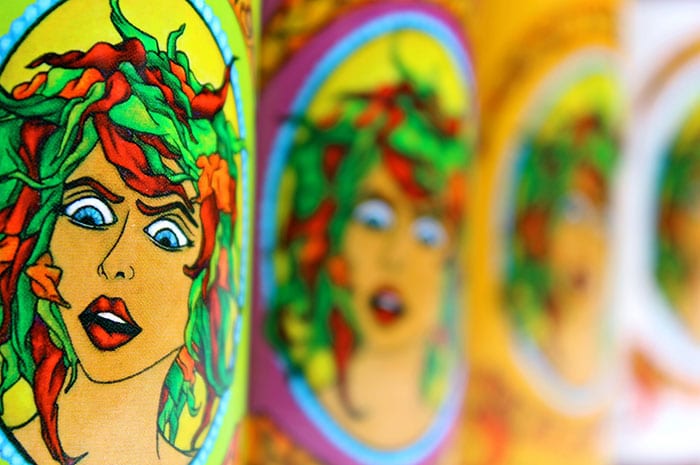 Intrigued to meet Anderson’s mother, Mary, she lived up to all the expectations and hype that Anderson had given me. Mary loves peppers. She’s what you’d call a certified pepper head, or chili head. She even has a pepper tattoo! She’s also so approachable, so friendly and so spicy, just like her hot sauce creations. She loves the brand and sports it proudly – and oh, doesn’t it compliment her fiery-pink hair nicely?

Anderson and Mary decided to keep their line of sauces small, with just a few different varieties. They do mix it up once in a while with small batches of specialty recipes made from peppers grown in Mary’s backyard. They mark each special batch with a unique label and fans will ask, “When can I get more of the yellow label sauce?!” Much to their fans’ dismay, these specialty batches only happen a couple times a year, so, moral of the story, when you see it, buy in bulk, people! Convenient for them, Anderson told us that his wife is a graphic artist. You’ve likely seen some of her work throughout Omaha’s Whole Foods. She also helped create the logo that you’ll find on their sauces, clothing, farmer’s market booth, pens and stickers – the “Crazy Gringa” that drew us together to talk hot sauce. 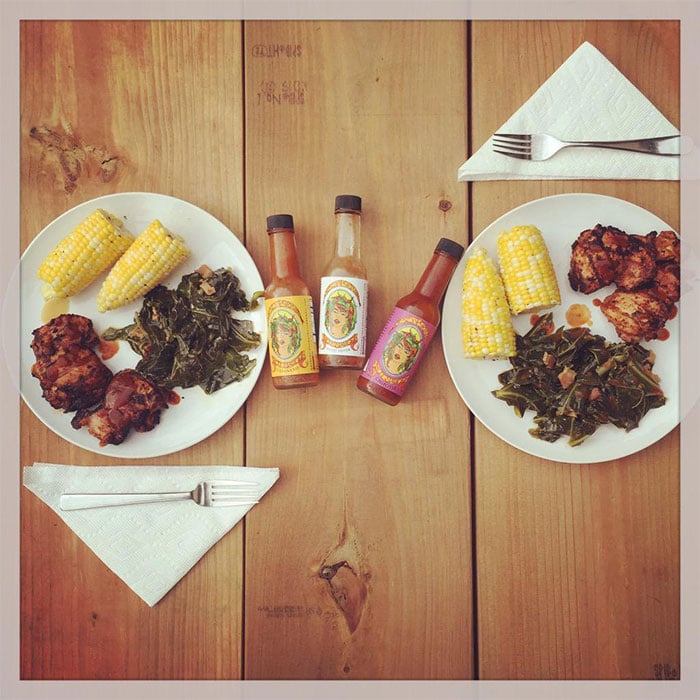 Lust-worthy food from Crazy Gringa’s Twitter feed, with sauce to match, of course!

Aside from keeping the brand development in the family, the Current’s also love keeping the product local with a focus on quality. You can buy their sauce in HyVee and Whole Foods, and you’ll see it in a growing number of local restaurants. And as they grow, they still plan to keep the sauces locally made and to continue to meet their customers. Anderson loves their customers and he really loves himself some Omaha. He loves the increasingly progressive culture, the neighborhoods that have more distinct identities and all the activities you can do right here. He loves the way Omaha is still a small enough place where you can connect to almost anyone easily, but still have big city advantages. It turns out he and I have some really great friends in common. Not surprising, since that is one of the best things about Omaha, after all. 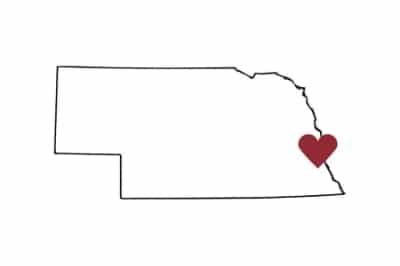 Was it not clear how much Anderson LOVES Omaha? We borrowed this adorable graphic from their website.

So here I am, sitting in my kitchen writing this blog post, adding jalapeno sauce to a taco. It’s appropriately Taco Tuesday as I write this, which happens to be one of my favorite things. That and meeting such cool people like Anderson and Mary, who help keep Omaha so great.

What makes Omaha great for you? Spread the wealth and tell me about your favorite local brands or businesses. I’m excited to explore more of our city! 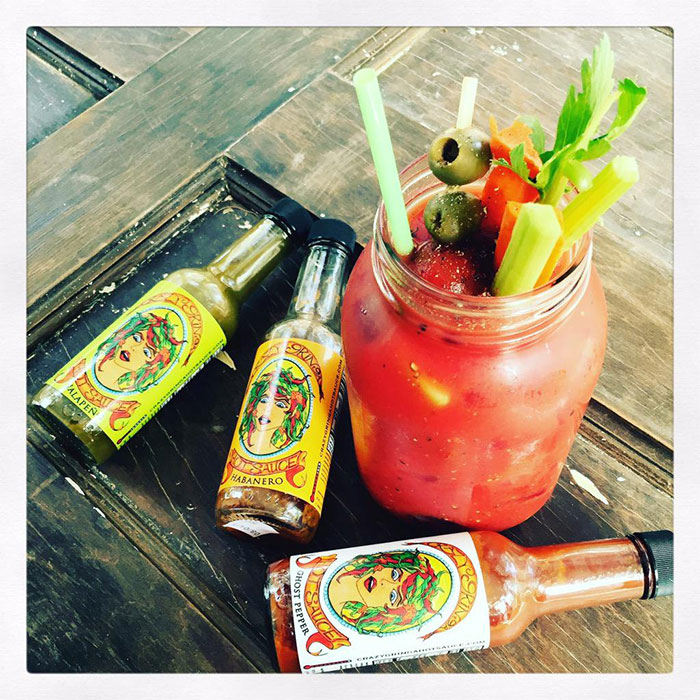 Ryan Ellis
Ryan Ellis, P.J. Morgan Real Estate President, is an Omaha native who loves his city – the people, the neighborhoods, the community, the food… He offers a unique perspective of what makes Omaha so wonderful, grounded in his 15 years of experience in the Omaha real estate market.

3 Comments on “The Hot Seat”