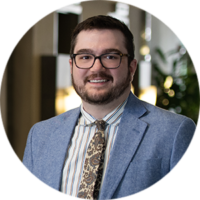 Ben Verdoorn joined PJ Morgan Real Estate in 2022 as a commercial accountant. Having watched the impact we made on the 13th Street neighborhood inspired Ben to join PJ Morgan Real Estate. He wanted to combine his two passions, accounting and enriching the community he loves and lives in.

His meticulous attention to detail mixed with his easy-going personality makes him excellent in his role, and a joy to work with. In school, he received several accolades for his academic achievements. He earned his bachelor’s degree from the University of South Dakota and his master’s degree in Public Administration from Bellevue University.

Ben is originally from North Sioux City, South Dakota. His outgoing and fun personality may be influenced by growing up in a large family. His dad has 15 brothers and sisters! In his free time, he enjoys playing video games, attending concerts, and listening to music from his vinyl record collection.