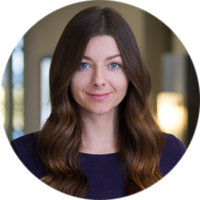 Angela Root first developed a passion for real estate while apprenticing under her father, who has built and remodeled residential and commercial properties across the U.S. for the past twenty-five years. She learned the basics of construction, as well as the art of negotiation, and developed a keen eye for fixer-uppers.

Angela began working in the entertainment industry in 2008 and spent the next decade producing a myriad of television programs for networks such as MTV, Showtime, A&E, ABC Family, TLC, E!, and Discovery. Her work has garnered both a GLAAD award and an Emmy. Production took her all over the world and taught her how to deliver compelling content in a high-stakes environment without compromising honesty in connection. She learned how to truly listen to the needs of her clients, and she has earned a reputation for a methodology that is both empathetic and efficient.

In 2018, Angela moved to Omaha from Los Angeles, California, for a handsome Air Force pilot with green eyes. However, she also quickly fell in love with the city and got her license in order to engage in her new community. As a representative for buyers and sellers in the housing market, Angela aims to exceed her clients’ expectations by fusing her experience in construction with her production background. She strives to provide diligent, authentic effort that yields remarkable results for anyone looking to buy or sell a home.

Angela and her fiancé live downtown and enjoy community events, supporting the arts, and getting lost in the great outdoors. In her free time, she teaches at The Barre Code in Dundee and produces creative content with a local production company. She loves movies, bourbon, live music, excitable puppies, and ice cream.