If you’re an 80’s child I hope you remember the movie Real Genius. Those unforgettable characters – Chris Knight, played by Val Kilmer (below), and some dude who played Mitch. And the unforgettable popcorn scene at the end of the movie. 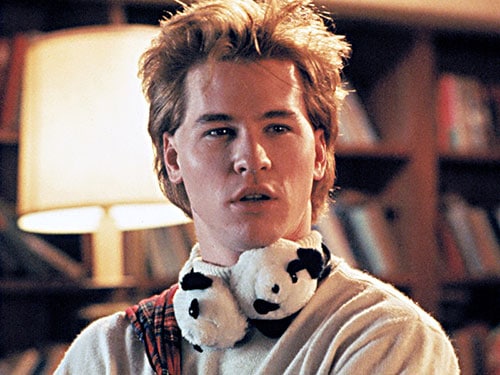 Can you believe he ever looked this young?!

Well… I suppose some of you may not know the movie. Basically, it is a bunch of smart, nerdy college kids making a high powered laser and the year is 1985. This laser is the stuff of the future.

Her name is Helga.

Fast forward to January 2016, in the offices of MTRL DSGN. Just me sitting around with some super cool guys that could show the Real Genius characters a thing or two. And don’t forget their totally tubular laser. Her name is Helga. The men behind the machine are Nick Mauer and Josh Powell. They also have a trusty sidekick/mascot/security guard Georgie –  Nick’s dog. 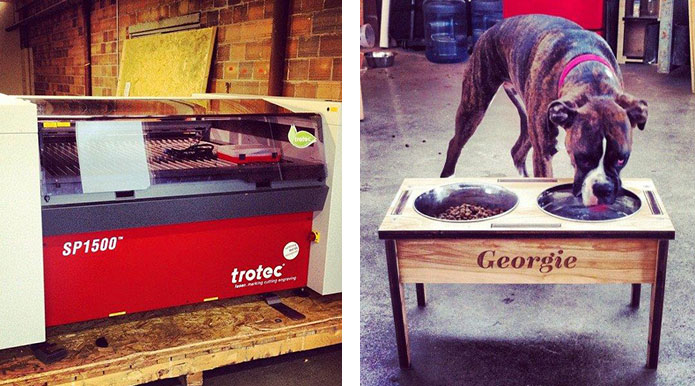 The loves of their lives – Helga and Georgie.

I’ve known Nick and Josh for a couple of years now. I’ve been able to watch them as they first looked at what became their office at The Mastecraft. They were planning how they would lay out their space, how much power they would need and how they would get their sweet, sweet laser into the space. I’ve been to art shows they’ve dreamt up and supported. I have even stumbled into a home that Josh was living in when I was showing it to a potential buyer (I promise guys – I’m not a stalker – just a big fan, and the house thing – that was purely coincidental).

Nick and Josh’s story started in Iowa. They grew up in Emmerson and Council Bluffs, respectively. Their paths crossed in college due to a mutual friend and their love of all things creative – including music. After playing in a band together, Nick moved to Portland to attend the Art Institute and Josh stayed in the area honing his skills in fine and visual arts. During this 8-year hiatus, they learned invaluable skills that would help start up their own business. Nick worked for companies like Nike (eh, no big deal, right?), doing product design, retail interiors and eventually working with lasers. Meanwhile, Josh was creating and curating art at the Harvester Artspace Lofts. These experiences led them down the perfect path to founding MTRL DSGN.

Over the course of a year, Josh and Nick spent many, many hours teleconferencing, traveling, planning and strategizing the plans for MTRL. Their business platform started with an eco-friendly machine and using environmentally responsible materials. The idea of taking reclaimed or sustainably produced wood is obviously environmentally friendly – but when you hear Nick talk about how the laser works the material – how it doesn’t change the make-up of the wood or print it with any chemicals that prevent it from being recycled – you really understand their passion for the environment.

Josh recounted to me how they started looking in Council Bluffs and Omaha for the right space to house MTRL. Eventually they were drawn to The Mastercraft because of the creative network of professionals within the building. I remember the day they talked about cutting into an exterior wall to install a glass garage door, so they could bring in this giant laser and how crazy it all sounded. I remember the day their laser showed up, a “rainy and sloppy day” as Josh describes it, where, at the last minute, he had to find someone with a forklift to nudge Helga the Laser above muddy water and through a newly cut opening in the building that we were all nervously hoping would be large enough. Now when I walk the halls of The Mastercraft touring potential new tenants, I usually reference MTRL and how they have worked with an astounding number of building tenants. When people think I’m exaggerating (no salesman ever does that), I point out their work – it’s hanging on walls and seen in furniture throughout the building. 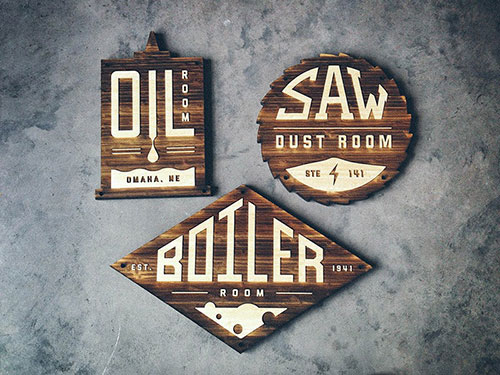 When they first opened their doors, MTRL was building their business off custom furniture made to order; however, that mission became hard to fulfill as the community was tugging them in a different direction. Today, they find themselves collaborating with other amazing talented folks in town who also design. They noted to me they are not just manufacturers with a really cool laser – they are really, really talented designers that bring a fresh, creative edge that helps build a better product. If you walk in their office today, you will find them working on custom architectural and interior design projects. You should see the cardboard wall panels they are working on, because a picture can’t quite do them justice. You’ll get to see the surface of the moon and experience light transferring through their work in a way you have not seen before. They literally capture the inside of the cardboard panels. It is so hard to put it into words – but damn, it’s cool. As they said, it was a “freak out moment” when they first achieved it.

The surface of the moon, as seen on cardboard.

If you can’t tell by now – I’m fascinated by these guys. They have all sorts of cool projects they are working on – but you can also still see a sparkle in their eyes for making furniture. They kind of unknowingly grin when they talk about it. They also have this unbelievable passion for Helga – happily telling visitors about her big glass tube that fires a 10-nanometer wave of light into CO2 gas. Like I said, this is Real Genius kind of stuff. I keep looking for Val Kilmer behind their cardboard panels. In the meantime, I’ve noticed some new faces. Christopher Prinz joined their team as their industrial designer. He is the man behind the killer cardboard designs and is an all-around brilliant artist. Another addition to their totally awesome team is Sklyer Cruse, focusing on architectural design.

I’m so excited to see what the future holds for MTRL. Experiencing their work is such joy. Their impact on the community has been amazing and the value they add to the culture at The Mastercraft is immeasurable (these folks measure twice, cut once… get it?). I’ll definitely keep following this group of laser-toting, design-minded geniuses. And if you haven’t seen Real Genius, I don’t want to give away the ending, but if you see me wandering around The Mastercraft with a bunch of corn kernels waiting to be popped, you have to get in on the action – and join in the question “Do you think it’s getting weird around here?” 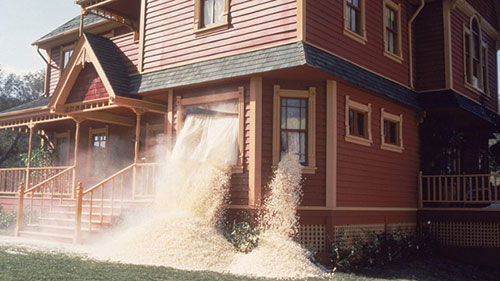 Chances are you’ve seen MTRL’s (and Helga’s) work before at Voodoo Taco, inCOMMON and Plank Seafood Provisions. Check out more of their handiwork at MTRLDSGN.com and keep your eyes peeled for more genius to come!

Ryan Ellis
Ryan Ellis, P.J. Morgan Real Estate President, is an Omaha native who loves his city – the people, the neighborhoods, the community, the food… He offers a unique perspective of what makes Omaha so wonderful, grounded in his 15 years of experience in the Omaha real estate market.